DO YOU NEED A QUICK SOLUTION TO A TECHNICAL PROBLEM? CLICK HERE FOR REMOTE DIAGNOSTICS

The benefits and disadvantages of charities moving to Office 365

Office 365 is Microsoft’s cloud-hosted, subscription version of its traditional desktop version. With many software providers now developing cloud-based solutions such as this for their customers, it is clear that there are numerous benefits for businesses wanting to keep up with this advancing technology. But many organisations within the charity sector are still wary of swapping their traditional paid-upfront, desktop-based versions of programs like Word, Excel and PowerPoint and migrating over to the subscription-based Office 365. In this blog we will look at some of the benefits and disadvantages of making the move:

Microsoft is continuously striving to improve its products and services. Therefore, organisations using Office 365 will benefit from automatic improvements and updates to the latest versions without the need to do anything manually. As Office 365 is hosted in the cloud, charities will always have the latest features, bug fixes and security updates. With the traditional versions of Office, security updates are included, but once the software’s assurance has expired, organisations don’t have access to any other further new features or upgrades.

It is also possible that Office 365 may be the more expensive option for charities as it is a subscription-based service that organisations need to pay for either monthly or annually. The desktop version of Office has a one-off upfront payment, but once paid it will last the lifetime of the device that it is installed on. Some charities are mixing different plans to get the most cost-effective option whilst still getting the functionality they need, for example buying perpetual licenses and combining these with the donated version of Office 365 which is called Office 365 Nonprofit Business Essentials.

A paid Office 365 subscription gives organisations the ability to install different apps on up to five devices per user. With the perpetual licenses for Office 365 Nonprofit Business Essentials, charities can only install and activate it on one device – so if they have multiple PCs they will need to purchase several licenses, which can end up being costly. Charities also need to bear in mind that mobile phones and tablets can’t run the perpetual version of Office, so having Office 365 in the cloud really does enable users to work from anywhere at any time.

When using cloud-based software, this saves on the need to buy, house and maintain expensive servers at the charity’s premises. SharePoint and OneDrive provide Office 365 users with a large amount of storage in the cloud, plus Microsoft ensures its products have a high level of data security so charities can rest assured that this area is taken care of.

As Office 365 apps are web-only, if organisations are in an area of poor connectivity or their broadband isn’t good enough, they may not get the complete app performance they were hoping for. Even if the charity decides on investing in a paid version of Office 365, Microsoft recommends evaluating the network connectivity and performance before deploying Office 365.

Organisations can access core apps including Word, PowerPoint, Excel and Outlook with Office 365 which can be accessed online and also via the traditional desktop route. For smaller charities with tight budgets, there are also free versions of Office 365 available which give access to web-only versions of these apps, along with storage, sharing and collaboration services such a OneDrive, Microsoft Teams and SharePoint. However, with the free web-only version of Office 365, the downside is that charities won’t be able to access and utilise all the different features and functionality within the core apps to the maximum. 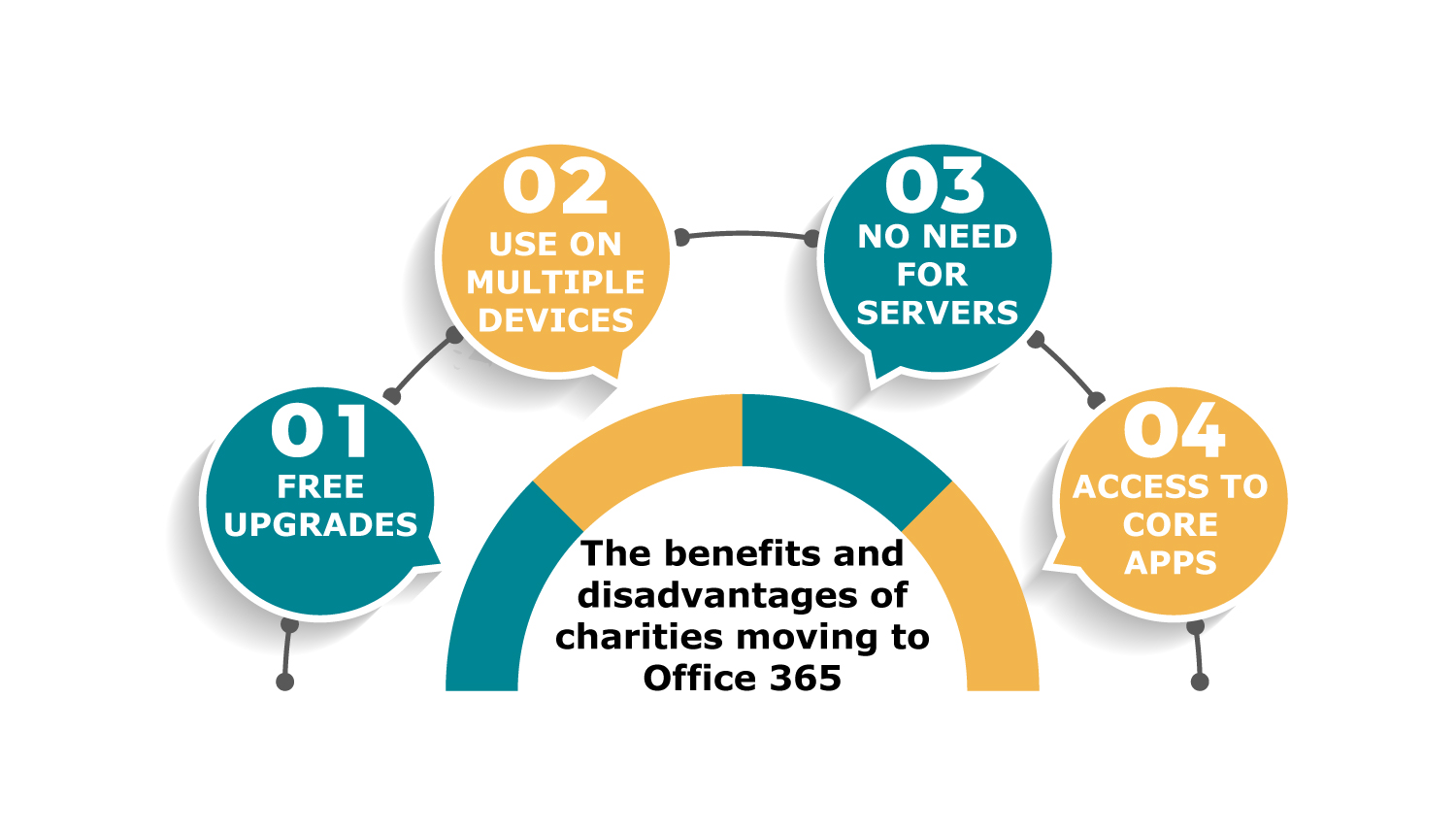 Office 365 is designed to bring together all of the key stakeholders within a charitable organisation. Documents can be accessed and shared by colleagues and other key stakeholders from within the organisation, from wherever and at any time. It is so much more than just the Word, PowerPoint and Excel apps that we all know and are familiar with, it is an entire collection of apps specifically designed to improve productivity and collaboration for charities.

How charities can achieve greater resilience with cybersecurity

How charities can achieve greater resilience with cybersecurity  Digital security and privacy compliance are becoming more and more important for charities today. Cyber…

How charities can build strong relationships with their volunteers

Volunteers are the heartbeat of any charity. They are essential in helping you to reach your charity’s overriding objectives.…

aka “Why did you move GP Partner?” m-hance, like most Microsoft Partners, receives several enquiries per month from existing…